Children are human beings to whom respect is due, superior to us by reason of their innocence and of the greater possibilities of their future. 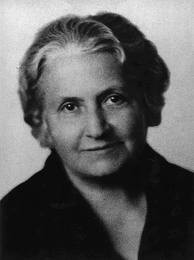 Maria Montessori, founder of the Montessori Philosophy, was born in 1870 and became Italy’s first woman medical doctor in 1896. Her special interest was in children and this led her to study the works of physicians such as Jean-Marc Gaspard Itard who worked at a Paris institution for deaf mutes.

Dr. Montessori believed that observation was just as important in education as in the treatment of the sick, and that the mind developed through the actions of the senses. She pursued this belief by experiments with the mentally defective.

In 1900 Dr. Montessori became the director of a practice demonstration school, established by the National League for Retarded Children. With 22 students she now had her first chance to make use of Itard’s sensory teaching materials and modify them to her own use. She designed and had manufactured a set of teaching materials based on his principles.

Through methodical observations of the children and their individual needs, she worked out the best means suited to teach them. Those children who had previously been abandoned as incapable of learning to function productively began showing the ability to care for themselves. When these retarded children passed exams on a level with ‘normal’ children, she began questioning the calibre of ‘normal’ education.

Dr. Montessori was so successful in her work with these children that she was now regarded as an educator rather than a physician. Realising that great result’s could be obtained by applying these theories to the teaching of normal children; she left her work with the retarded.

In January 1907, Dr. Montessori opened the first Casa di Bambini in the San Lorenzo slums of Rome. When the building was offered to Dr. Montessori, the owners hoped that she would provide a place where the children of working mothers could be kept off the streets and thereby reduce vandalism. In the end the children were not only off the streets, they became eager students. 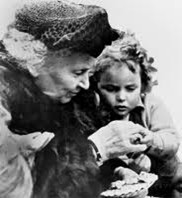 The materials for learning were designed to be self-correcting and the children thrived on the activity involved with learning. In observing these children, Dr. Montessori noticed that after doing a particular activity, the children continued working with it over and over again, rather than putting it away. They seemed to work for the sake of working, not for reward. She also introduced reading and writing to these children of illiterate parents. This project marked a turning point in Maria Montessori’s career and life, and would soon cast her in the role of the world’s foremost female educator.

By 1913 there were nearly 100 Montessori schools in America. Currently the United States has three thousand private Montessori Schools and a like number of educational programmes implementing or supplementing with Montessori in their classrooms. The Montessori Method has proven itself both adaptable and beneficial to all socioeconomic levels and specialities within the educational systems.

In 1976 the first Montessori School was opened in South Africa by Mrs. Strilli Oppenheimer. Today there are numerous Montessori schools throughout South Africa as well as in Botswana, Swaziland, Zimbabwe and Namibia.